It's a nice day trip from the Mountain View Motel & RV Park near Joseph, Oregon,  to see petroglyphs along the Snake River at the Buffalo Eddy historical site.
The artwork at Buffalo Eddy is attributed to the the Nimí'pu (Nez Perce), who created the art between 300 and 4,500 years ago, according to the National Park Service. The symbols are preserved on both the Washington and Idaho sides of the river, but the glyphs on the Idaho side can only be viewed from the water, which makes for a popular tour boat stop. Buffalo Eddy takes its name from some of the pictures on the Idaho side, which depict bison and hunters on horseback. 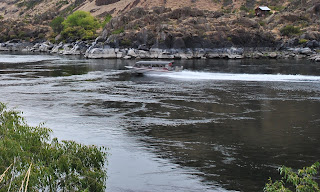 HOW TO GET TO BUFFALO EDDY FROM THE MT VIEW MOTEL

To get there from the motel, turn left (north) on the Snake River Scenic Byway (Hwy 82), to Enterprise, then turn right at the Chevron station onto Oregon Route 3 toward Flora and Lewiston. Fill up on gas in Enterprise because the next fuel is 79 miles north in Asotin and these directions take a shortcut that cuts off before then.


Two miles north of Enterprise, you may see buffalo grazing at Stangel Bison Ranch. Grass fed bison meat from the ranch is locally available at The Dollar Stretcher Grocery Store at Enterprise and at several local restaurants.
JOSEPH CANYON VIEWPOINT
At 21.6 miles you will enter the Wallowa-Whitman National Forest with many roads and trails to explore sometime. 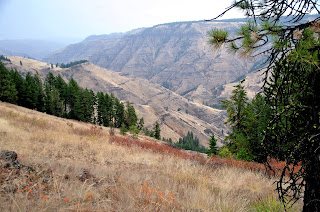 The pullout at Joseph Canyon Viewpoint, 30 miles north of Enterprise, features a beautiful vista of Joseph Canyon, where, tradition says, Chief Joseph was born in a cave about 2,000 feet below.  Joseph's band sometimes wintered at the base of the canyon along Joseph Creek. 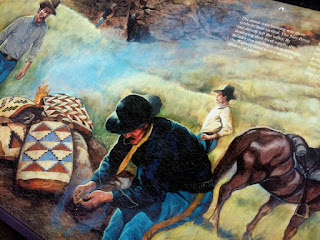 After about seven more miles, the road starts winding down Rattlesnake Grade with extreme switchbacks and beautiful scenery, and the Grand Ronde River at the bottom. You'll cross into Washington on this stretch and the road turns into Hwy 129. Bogan's Oasis, on the river is the place to stop and eat or get an order to go. Then the highway continues snaking back up to the top of the plateau. 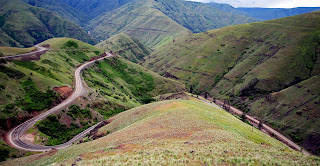 Just after leaving the trees past Fields Spring State Park, look for Montgomery Rd. on the right (58 miles past Enterprise). Follow this road for 19 miles down to the Snake River. It turns from asphalt to dirt and changes to Sherry Grade Rd., then Crouse Creek Rd., before bringing you to Snake River Rd.


BUFFALO EDDY PETROGLYPH SITE
Turn right on Snake River Rd. and drive 4.5 miles to the Buffalo Eddy Petroglyph pullout. There is an interpretive sign and a short trail that leads to a tumble of rocks along the water with many ancient symbols scratched into them. How many can you find? 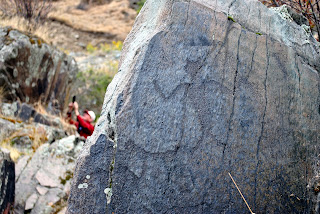